We have recently closed the 2017 Nim Community Survey. I am happy to say that we have received exactly 603 responses, huge thanks go to the people that took the time to respond. We’re incredibly thankful for this very valuable feedback.

For the results of the previous year’s survey, take a look at the 2016 results analysis.

Our survey ran from the 23rd of June 2017 until the 14th of August 2017. The goal of this survey was to primarily determine how our community is using Nim, in order to better understand how we should be improving it. In particular, we wanted to know what people feel is missing from Nim in the lead up to version 1.0. We have also asked our respondents about how well the Nim tools worked, the challenges of adopting Nim, the resources that they used to learn Nim and more. We repeated the survey with the same questions this year to see how we did over the past year.

Unlike in the last year, this analysis will not go over all the results. Instead it will only go over the most interesting answers.

A word on the response count

In comparison to last year we unfortunately received 187 less responses. I suspect the reason for this decrease was the fact that we were not able to advertise the survey as well as the previous year, I got lucky last year by sharing a link to our survey in the Rust community survey results Hacker News thread. This year Rust’s results were late and so I didn’t get the same opportunity.

But with that in mind I think the number of responses is still good.

Like last year we split up our respondents into three groups:

This allowed us to ask each group specific questions. For example, we asked ex-Nim users why they’ve stopped using Nim. 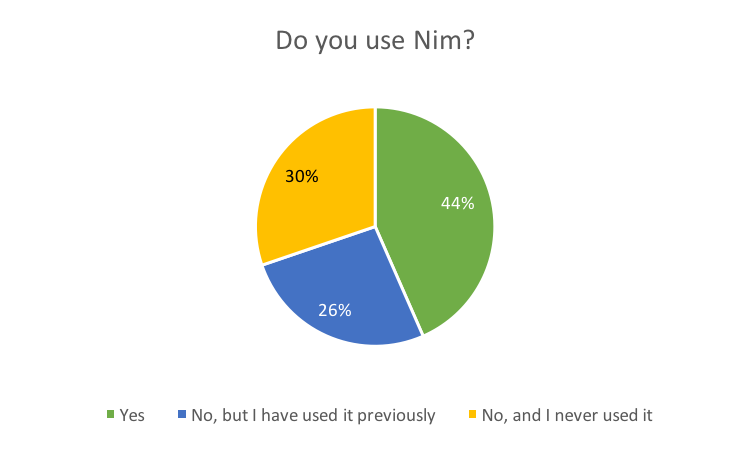 This section includes answers from current Nim users only (44% of respondents).

How long have you been using Nim?

Just like last year, a large proportion of our Nim users are new. This suggests that our community is growing and is a good sign. On the other end of the spectrum we can see that there is a significantly higher number of Nim users that have been using Nim for more than 24 months.

Nim at work and project size

The questions related to these topics got very similar results to last year:

How is Nim being used at work?

This was a free-form question so I will just pick out some of the common and interesting answers. According to the respondents, Nim is used at work for:

How could we help make Nim more accepted at your company?

Another free-form question, I will pick out some of the things that respondents have identified:

Nim and its tools

In this section of the survey, we wanted to find out the tools that Nim users are utilising when developing Nim applications.

What editor(s) do you use when writing Nim?

Programmers swear by their editors. What does the Nim community prefer? 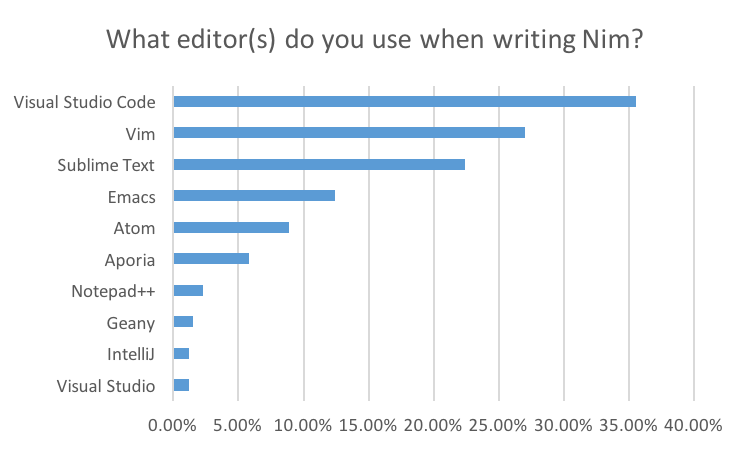 There is still a large number of Vim users, but now they are overwhelmed by the Visual Studio Code users. VS Code has gone from 16.5% to 35.5%!

Again, the results for these questions are very similar to last year. I will simply provide a summary: 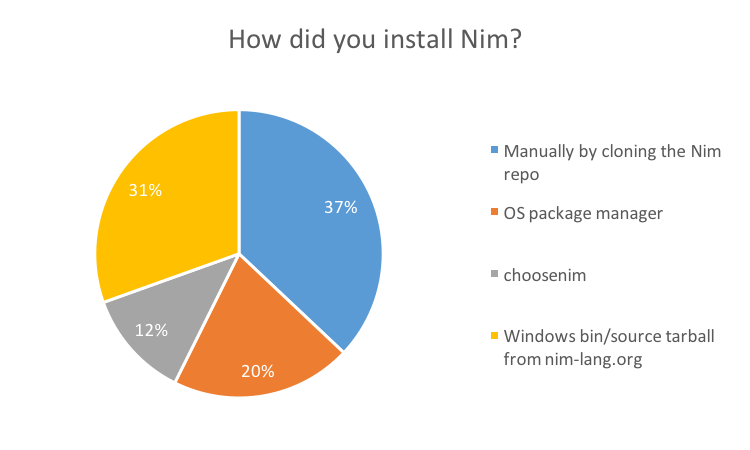 It seems that the majority are still in fact installing Nim by cloning the Nim repo manually. This makes sense as Nim is still evolving quickly, for most people it makes sense to stay on the bleeding edge.

What critical libraries are missing in the Nim ecosystem?

This is a good list of projects for the Nim community to take up. The respondent’s were asked to freely give libraries that they need, here are their (mostly raw) answers (duplicates left in to show popularity):

What development tools can make you more productive when working with Nim?

How long did you use Nim before you stopped?

This question is new. It shows that ex-Nim users are fairly equally distributed based on the amount of time they used Nim before deciding to stop.

This was a free-form question. Some of the common answers were as follows:

Here are some other interesting reasons:

Reasons for not using Nim

As with the previous year, the most popular answer to this question was once again to do with maturity of Nim as well as lack of libraries and good IDE support.

There were also a number of free-form answers to this question:

What improvements are needed before v1.0 can be released?

This received a number of free-form answers which I will outline here: 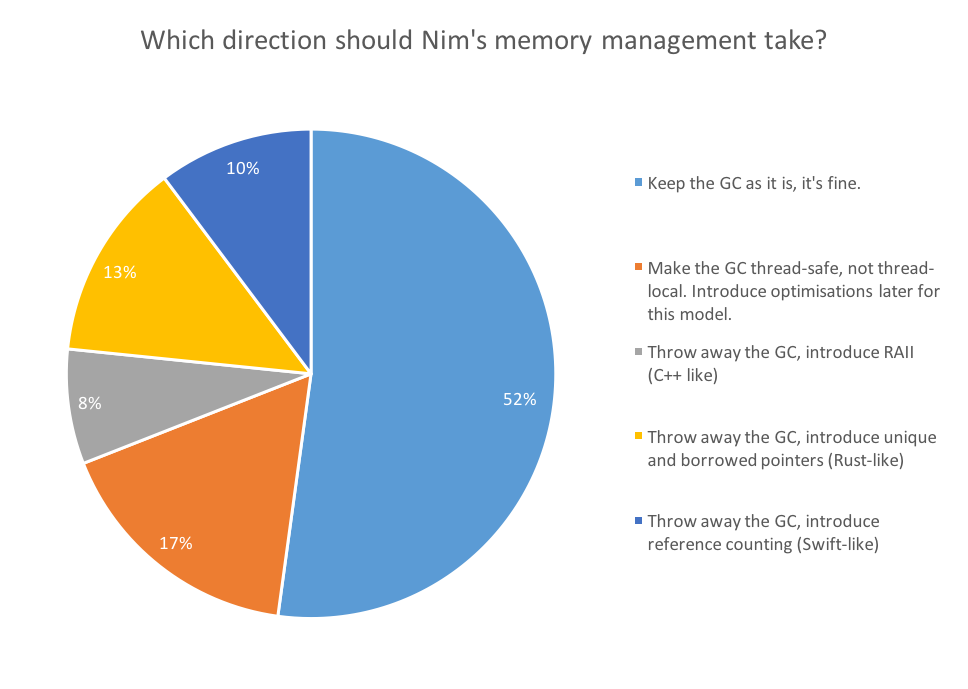 There was a number of free-form answers as well. Most of them spoke about providing all approaches, i.e. the “have the cake and eat it too” approach. Many are conscious of the fact that a GC makes programming smoother so they don’t want the Rust model, but for use cases where it’s necessary they do want it.

Like last year, at the end of the survey we gave our respondents a chance to speak their mind about anything they wish, with a simple question: “Anything else you’d like to tell us?”

There was a lot of great feedback given in this question from people who obviously really care deeply about Nim. There is too much to outline here, but rest assurred that we will take it all into account and do our best to act on it.

In addition to feedback, we were also overwhelmed by the amount of positive comments in the answers to this question. There was a lot of support from the community thanking us for our work and determination.

I’ll let some quotes speak for themselves:

Keep up the good job. I love Nim!

Please just keep up the excelent work. Nim is awesome!

Our community is truly brilliant. We thank each and every one of you for filling out this survey and hope that you will help us tackle some of the challenges that face Nim.

This survey was a good place to give us feedback, but please don’t wait for the next one. We are always looking to hear more from you and we hope that you will participate in discussions relating to this survey as well the future of Nim.

Thanks for reading, and have a good day!