We have recently closed the 2018 Nim Community Survey. I am happy to say that we have received exactly 771 responses, huge thanks to all the people that took the time to respond. We’re incredibly thankful for this very valuable feedback.

For the results of the previous year’s survey, take a look at the 2017 results analysis.

Our survey ran from the 23rd of June 2018 until the 31st of July 2018. The goal of this survey was primarily to determine how our community is using Nim, in order to better understand how we should be improving it. In particular, we wanted to know what people feel is missing from Nim in the lead up to version 1.0. We have also asked our respondents about how well the Nim tools worked, the challenges of adopting Nim, the resources that they used to learn Nim and more.

This article goes through some of the highlights in the results for the survey and discusses them in the context of the previous year’s results. The aim is to understand our users and to figure out priorities for Nim’s future.

This time around I have decided to publish the Google Survey results page, for some this may be more interesting than reading the highlights. It’s available here: https://i.imgur.com/g7slQ8w.png.

Changes since the last survey

The questions in this survey were largely the same as last year’s, but there were some key changes. In particular, the following questions were added:

The following questions were removed:

The following questions were modified:

The “What critical libraries are missing in the Nim ecosystem?” and “What development tools, if any, can make you more productive when working with Nim?” questions were merged into “What features, tools, or libraries would you like Nim to have?”

We wanted to gain deeper knowledge of our contributor’s experiences, so a brand new section titled “Contributor questions” was introduced.

Like last year the respondents were split up into three groups:

This enabled each group to be targeted with specific questions. For example, ex-Nim users were asked why they’ve stopped using Nim.

This year the proportion of responses from current Nim users has grown from 43% to 47%. This is a slight increase in the proportion of Nim users answering the survey, but it’s important to note that the absolute number went up by over 100 users from last year.

How could we help make Nim more accepted at your company?

This was a free-form question so there were many different answers, but a few answers were very common. By far the most common request was “version 1.0.”

Other honourable mentions include “more documentation”, “more stability” and “Free balloons”. These mostly align well with the general wishes of our community so you will see similar answers in later questions as well.

What editor(s) do you use when writing Nim?

What is your experience with the following tools?

This questions gives a good idea about how popular Nim tools are and whether using them is enjoyable.

The most unpopular tool is nimpretty, with 75% of respondents answering that they haven’t used it.

The most disliked tool is nimsuggest, although it is only disliked by 6% of the respondents.

How did you most recently install Nim?

The reasons given vary widely which makes their analysis challenging. In order to make it easier to see the reasons at a high level, I went through and grouped them into generic categories. 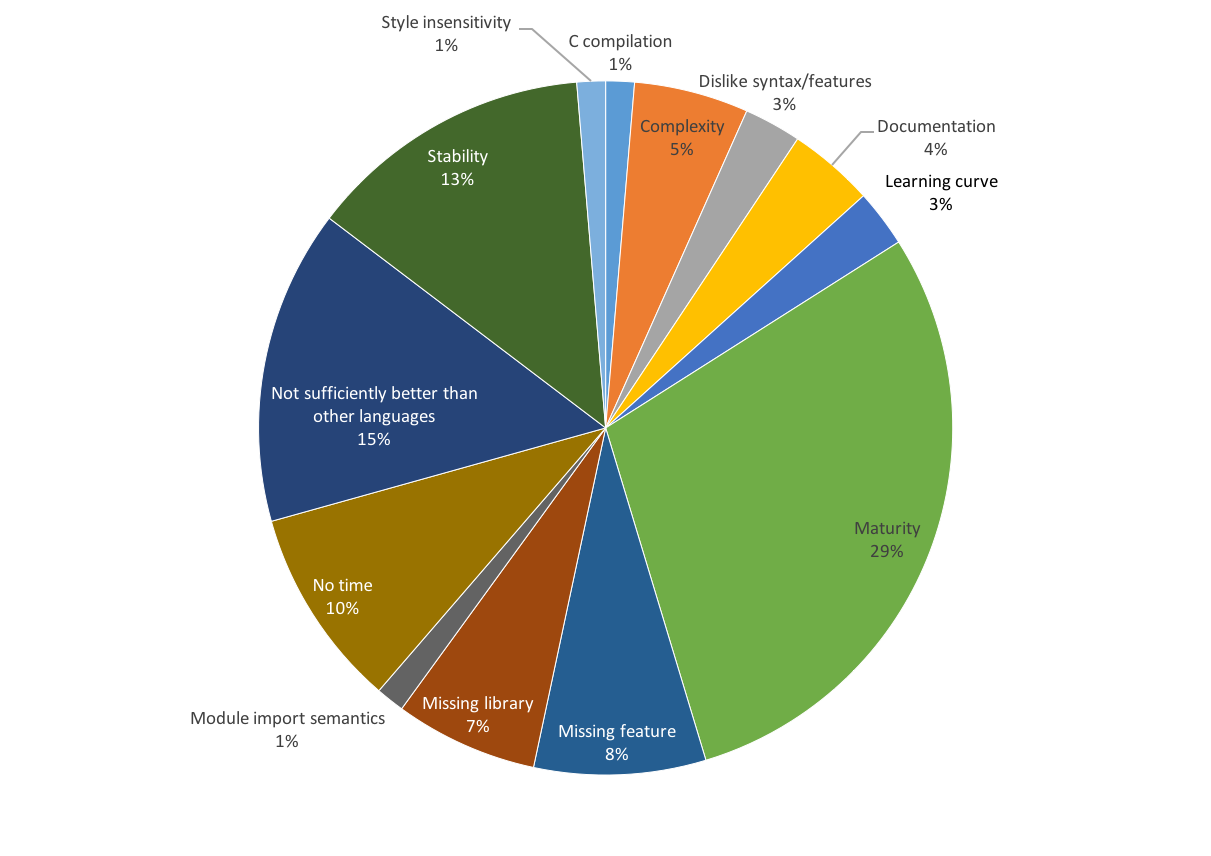 This offers some good insight into why programmers have stopped using Nim.

The second reason, categorised as “Not sufficiently better than other languages”, was mostly the respondent specifying that they are happy with another language, or that their project is more suited to another language.

Stability was the third reason. For this category, the respondents mostly talked about the stability of Nim as a whole. In many cases this meant tools such as IDEs not working properly rather than the compiler being buggy, although the latter was prevalent as well.

Top reasons why programmers are not using Nim

This is similar to the previous section, but it focuses on respondents who do not use Nim. As previously these vary widely so they have been put into categories. 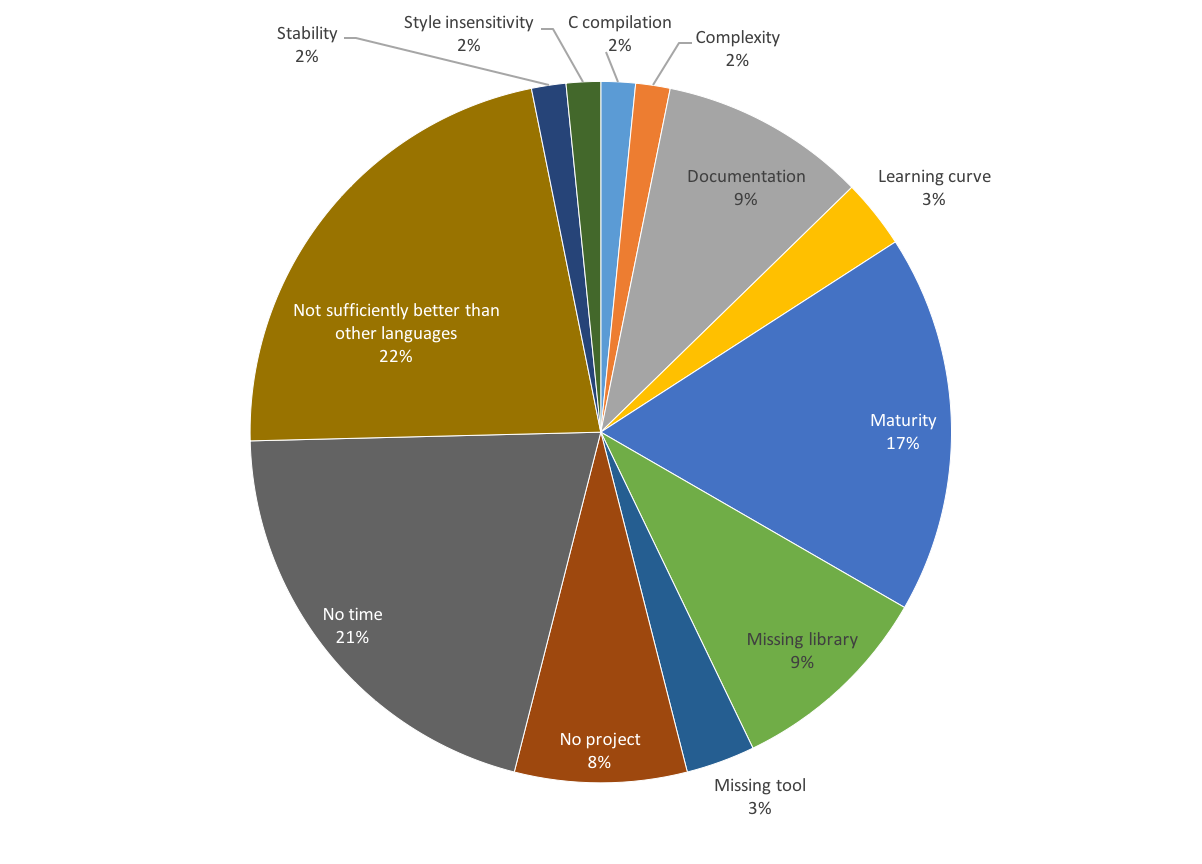 Note that this is based on the long-form question which was asked in addition to the multiple choice question.

It seems that the number one reason why respondents are not using Nim is because they do not see the value in it. Many of the respondents didn’t see a reason why learning Nim was worthwhile. This is reflected in the number 1 category: “Not sufficiently better than other languages”.

Lack of time is of course a big factor too and in many cases it ties in with respondents not seeing value in learning Nim.

Nim’s relative immaturity was another strong theme among the responses.

An interesting number of respondents specified that they simply didn’t have a project, or couldn’t come up with a project to write in Nim. It may be worth exposing newcomers to some project ideas to alleviate this.

Do you feel well informed in the direction that the Nim project is heading? 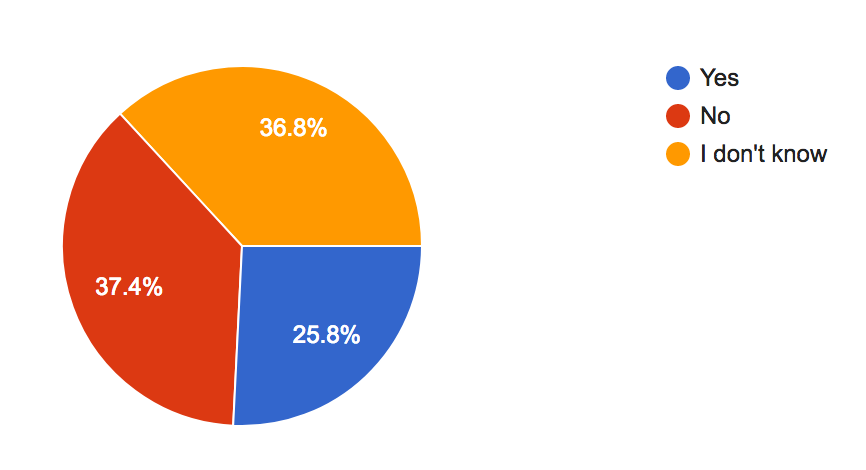 This question was asked last year to gauge how well we are informing users about where the Nim project is heading. In comparison to last year, the proportion of respondents answering “Yes” has increased to 25.8% from 23.5%. This is positive but we should do better, while it is an increase it is relatively minor. We should look into further ways to inform our community of our roadmap and other plans for the future.

Should Nim 1.0 have been released already?

This is a new question, it’s aim is to gauge the feeling in the community around whether a stable 1.0 release of Nim should have been made already.

Right now, the results are fairly even and thus it’s hard to know what to take away from them.

What improvements are needed before Nim v1.0 can be released? 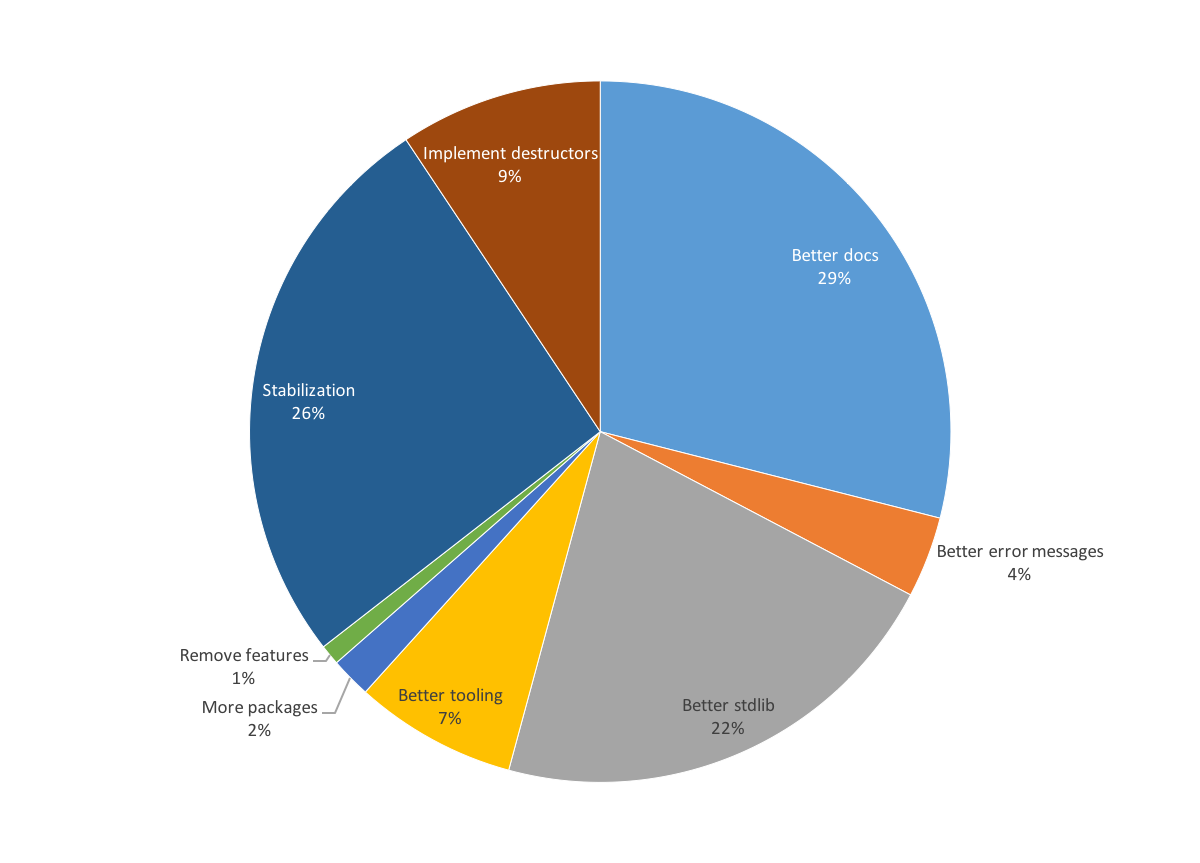 The chart above shows the general trends of what respondents felt was needed for Nim v1.0 to be released.

It was surprising to see so many respondents mentioning destructors, it seems that many people are excited about this feature and want it to be included in v1.0 of Nim.

The top three improvements though were, in order, “Better Docs”, “Stabilization” and finally “Better Stdlib”.

For the first one, respondents generally asked for more polished documentation but a significant portion of them also asked for video tutorials. Many felt that video tutorials were a good way to learn a programming language, we have already created some live streams where we coded Nim projects but it is obvious that we need to do more. In particular, we should:

For the second one, respondents generally asked for a more reliable experience with all language features. A reduction of compiler crashes and surprising behaviour was among the top wishes.

Finally for the “Better Stdlib” responses, many of them asked for a cleanup of the standard library. In particular the removal of deprecated functions but also the migration of some modules to a separate repository available via the Nimble package manager.

Please remember that you do not need to wait for a survey in order to give us feedback, of course you’re more than welcome to wait if you wish, but ideally share your feedback with us immediately. We can be found in various different places, see the community page for links and instructions on how to get in touch: https://nim-lang.org/community.html.

If there are any questions about this survey I’m more than happy to answer them. Feel free to reach out to me on the community channels linked above.

Thanks for reading, and have a good day!