Nim community survey 2019 has been open for 50 days, and we have received 908 responses, which is our record-high number (771 in 2018, 603 in 2017). Before we go into details, we would like to thank all the people who took the time to respond. We really appreciate the feedback!

The goal of this survey was primarily to determine how our community is using Nim, in order to better understand how we should be improving it. The main difference from the previous years is that in 2019 we finally did release version 1.0, and we wanted to see how accepted v1.0 is in our community. We have also asked our respondents about how well the Nim tools worked, the challenges of adopting Nim, the resources that they used to learn Nim and more.

Based on the answer to this question, the respondents were divided in two groups and they’ve received separate set of questions.

Approximately 2/3 of the respondents use Nim (23% frequently, 41% occasionally), while the remaining 1/3 is divided between people who never used Nim and people who stopped using Nim.

For people who have used Nim previously but stopped the most frequent reasons were (free-form question): lack of libraries (small and not mature ecosystem), incomplete documentation, bad editor support, coworkers don’t use it, etc.

About a half (47%) respondents are new Nim users - they’ve started using Nim in the last 6 months. We have 35% of experienced users (between 6 months and 2 years), and 18% of Nim veterans (more than 2 years of Nim experience).

An average Nim user would be a software developer from Europe.

Besides Europe, our users mostly come from North America, Asia, and South America, with couple of users from Australia and Africa. Three quarter of our users are either software developers, students or scientists.

We have users from all age groups and with programming experience varying between 1 and 40 years, proving that Nim can be used both by beginners and the experienced programmers. 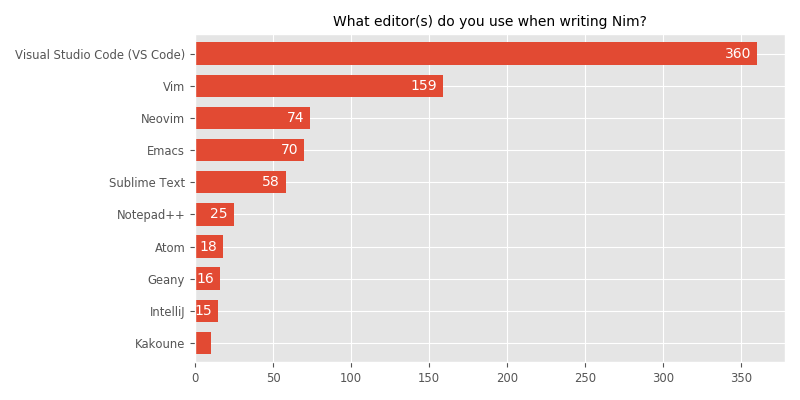 The most used editor, expectedly, is VS Code, which is used by 61% of Nim users. In the second place is Vim/Neovim, followed by Emacs and Sublime Text. (Note that this is a multiple answer question, and some respondends use more than one editor)

With version 1.0 released only three months before this survey, we were afraid that we might not get the realistic picture about what Nim version is used the most, because people might have not yet caught up with the latest version.

In the end it seems we didn’t have to worry: the large majority of users are using the latest stable version (1.0.x). There are people who use multiple Nim version, but at least one of them is either 1.0.x or the latest devel version.

We can partially attribute this to the mostly painless upgrade process:

This is one of the areas where we should improve. The majority of users use Nim only sporadically, and only 1/4 of them use Nim for at least half of their programming work.

Nim is mostly used for writing command-line programs and automation/scripts, followed by data processing, libraries, web services, and GUI. Also, some people use it for game development. (Unfortunately, it wasn’t offered as a choice in the survey, people wrote it down in the ‘other’ field)

The large majority of Nim users are targeting Linux, followed by Windows and macOS. Most frequent “smaller” targets are JavaScript, Android, web assembly, embedded, and iOS.

People mention stability, better tooling, more 3rd party libraries, having to mature, and better documentation as the main fields where Nim has to improve to be more accepted in their companies.

People find Nim easy to learn, with only 3% of respondents feeling that learning Nim is hard or very hard. Almost all of them have read the official tutorials, about half of them have read “Nim by Example” and/or “Nim in Action” book. Rosetta code examples are also a popular choice as a learning resource, followed by “Nim Basics”, “Nim Notes”, and “Nim Days”.

If anyone would like to create some more learning materials for Nim (which is very high on the community priority list, see below under “Nim in 2020 and beyond” section), the most wanted fields are code examples and written tutorials.

The most frequent reasons given for not contributing (yet) are: lack of time and lack of skill/experience.

We’ve asked you how satisfied you are with the Nim tooling:

Most of our users use Nimble package manager and they are very satisfied by it. A smaller amount of users picked Choosenim as their way of installing and updating Nim versions, but those who did are quite satisfied with what it has to offer. People generally like Nimsuggest, even though not as much as the first two tools mentioned.

Nimpretty and C2nim are used less often than other tools, and feelings about them are also positive.

How should we prioritise improving the existing situation?

When it comes to the proposed new features, it is expected to see less enthusiasm than for improving the existing situation (fixing bugs, improving documentation) as most people, except few regulars on our community channels, are not properly informed about them and/or they might not know that they could also benefit from them.

We also take the blame for not communicating properly what each of these features would bring to Nim world. For example, we’re currently working on --gc:arc which, in our opinion, should make Nim both faster and more memory efficient, and as such it might become “one memory management to rule them all”. But at the time the survey was created, the work on it has just started and the benefits of it were unknown to the most of our users.

Please remember that you do not need to wait for a survey in order to give us feedback, of course you’re more than welcome to wait if you wish, but ideally share your feedback with us immediately. We can be found in various different places, see the community page for links and instructions on how to get in touch.